Today, author of  “The Fighter Pilot and His Lady” shares some of the difficulties that military families face.  I hope that you find it truly helpful. 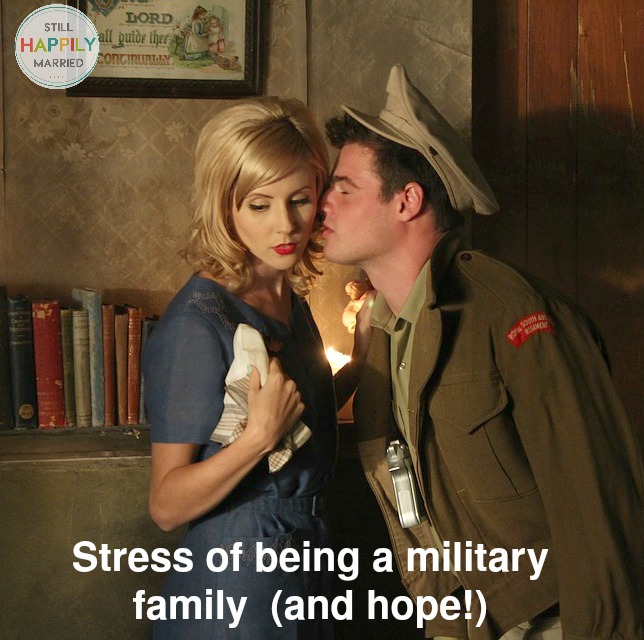 “It took a special woman to be a military, wife and so far Chip hadn’t found the right woman.  Military marriages are full of separations and moves.  He had seen too many breakups, not to mention the widows and families who had lost their husbands and fathers.”

Both my wife and I grew up in military families so we knew what to expect, however many new families have no idea of what they are getting into.

One of the biggest concerns for my mother and both my wife and I was the uncertainty.

You never knew when you were going to move or go on temporary duty (TDY).  Some moves you had time for a decent move, but not always.

One time my father received orders to move our family from Camp McCoy, Wisconsin to Fort Bliss, Texas a long two day drive.  He had three days to be there. It over a month to receive their furniture, dishes, etc.

One time I had orders to Wassercoupe Germany.  When we got off the airplane I was handed classified orders to a different location.  There was a whole bus load of us going to the location and we didn’t know where it was.  It turned out to be a new base near Hessisch-Oldendorf. My household shipment baggage went to Wassercoupe. The base housing was unavailable and there was very limited local housing.  Most of the families were forced to live in hotels up to six months.

The other cause of anxiety for my wife was the 90 day plus TDYs to classified locations….in a combat zone in Central and South America.  This was when the brutal El Salvadorian war was going on, Nicaragua was causing trouble, and the FARC were kicking up their heals in Colombia. She didn’t know if I was in harms way or not.

The same uncertainties and time of stress for my mother was when my father went to Korea for 18 months and later to Viet Nam for a year. Both times he was in combat situations.  There were no phones, only mail.  It took one to two weeks one way for mail.

My wife had the same problems when I was in South and Central America.  I was only  able to send and receive mail when the supply flight came in once a week.  The same when I was remote (meaning your family could not be with you) in Korea for a year except we had phones.

I called every Friday saying, “This is a three-minute call to say I love you”.
In a twenty year career I had two remotes.

In addition to husbands being gone and possibly being in harms way wives had to run the family until he returned.  Wives go from being a wife to a single mom and then when the husband returns back to a wife, giving up some of her control. It was hard for my wife to give up control when I would return.  My mother had the same problems.

The big key to keeping the family together for us, was communication.

We always wrote letters every day and called when we could.  We didn’t have the internet, cell phones, etc. when I was in the Service.  In Germany my parents didn’t even have television, phones, or real news.  All you get overseas without the internet is the Armed Forces Radio Network and the Stars and Stripes news paper.  The news we received was very carefully picked.

A final note.  It is all for the good of the branch of service, what the individual needs is often sorted out after they get on station.  In my case the Air Force had to man the new base at Hessisch-Oldendorf, I had no choice in the matter.

As the military gets smaller it means the same people are transferred more often, especially those in combat career fields, to the Middle East or other locations. The above are reasons the divorce rate is higher among military members over civilians.

On the positive side, the units become families, especially the smaller combat mission oriented units.  There is a true saying that in combat men become brothers. Well, the wives become sisters.  If there is a death the whole family (unit) mourns.

When a new family moves into a unit the other members help the new family by lending them items they need, orienting them to the local area, and the showing them the services available. New families become one with the unit right away.

Neighbors drop by with welcoming gifts (usually food), offering friendship, and help the new family in any way they can.  When the unit deploys the wives help each other out, have get togethers and support each other.

My book is available here at Amazon and www.barnesandnobel.com

Previous Post: « Holding on when it gets hard…
Next Post: The secret to getting through stressful times in marriage »